The Mansion of E

Discussion and spoilers for the daily fantasy webcomic The Mansion of E (www.mansionofe.com)

The Mansion of E :: MoE Questions and Feedback

For ease, I have labelled the areas I want questions about. 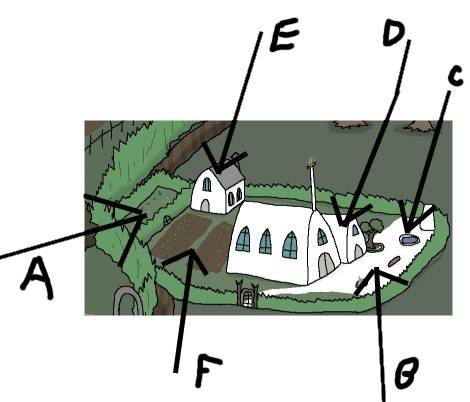 My questions are actually more along the lines of confirming or correcting my guesses. In order:

A: Why is this area enclosed? It doesn't look like a cemetery but the presence of grass points away from a garden. There are rows so it might be a purposefully grown-something. Trees/bushes?

B: I take it that this is the courtyard for gathering. I note the presence of a purple-thing (a bench of some sort?), something enclosed that is probably a fountain (wonder how that works without magic, or does it?). There seems to be a white slab, I am betting that it is also of importance. Either a standard feature of Temples as an official log (perhaps who have served in the Temple) or a memorial. I also note the tree. Is it a branch of The Tree? It seems similar to the Big Tree certainly. A special variety perhaps?

C: A pool? Perhaps some sort of analog to a baptism pool?

D: This secondary building. A residence for the Guardian and Oracle? Just to be clear, the relationship of the two is a close working relationship but is it something else?

E: I am guessing, by the chimney, that this is the Temple's mortuary/crematory/place-where-they-keep-dead-bodies-before-burial?

F: Are these herb-gardens? The bare earth certainly suggest gardens and I have doubts that the officially established priest-pair need to grow their own veggies.

Most of this will be answered fairly soon in-strip, but I should talk a little about the whole Temple religion.

I'll be blunt and say that in Real Life I have very little use for organized religion. Still, when it came time to flesh out "Mansionland" society, I decided if I was gonna have a religion, I'd come up with one that is as generally benevolent and well-meaning as possible when being composed of fallible human beings. So it preaches growth and self-reliance, meaning in regards to F, yes, an Oracle/Guardian team are expected to make an effort, however ceremonial in some cases, to grow (some of) their own food. The Guardian often does most of the actual gardening work. In a small assignment like Eetown, the Oracle is also the village schoolteacher, healer and midwife, so with A, those are special medicinal herb-bushes including stiflebloom; they are grown separately behind a locked gate and hedge because they are sacred/valuable and some of them could be dangerous if casually consumed. There are professional secular healers around, who come into play when a population gets too big for an Oracle to tend to by herself; Eetown will have to recruit one before much longer.

A Guardian is not simply an Oracle's bodyguard and gardener; the Temple recognizes that men and women both have their place and purpose in the scheme of things, and while the Oracle is expected to be the dominate partner, sometimes a man is needed to offer council/advice to a parishioner. How much of this a Guardian actually does again varies from place to place. Dirge, the current Eetown Guardian, doesn't talk much, but that is a personal preference. Oracles and Guardians are recognized as being human beings with urges, and are officially allowed (currently in a turn-a-blind-eye way) to engage in sex, with each other or other people if they desire, as long as they are discreet about it and the Oracle doesn't get married or pregnant. Oracle Threnody and Dirge are very fond of each other, but are not romantically linked; Dirge is suspicious of Sylvester's motives/safety and doesn't like him hanging around Threnody.

The Eetown graveyard is located on a rather barren island in the bay called Craggy; people are buried there "intact"; most townsfolk only set foot on the island for funerals. This is again a local custom, not something dictated  by the Temple. The separate building E is where the Guardian lives, and the chimney is attached to a stove for heating/cooking. The Oracle lives in D. It has a chimney too, but it's hidden behind the main building from this angle, along with the communal wood-pile and composting-outhouse.

B is a firepit, not a fountain, with a symbolically-eternal flame. The tree is not a branch of the Mansion's Tree; none of those are seen anywhere above ground away from the Mansion.

C is a pool. It is used in marriage ceremonies, not baptisms, as mentioned here and here. The Temple freely allows same-sex marriage; even a Throwback like Omega wouldn't have a problem with this, though this was not always the case. The whole arrangement is a nod to the idea of the not-literal elements which make up the world, earth, wood, fire, stone. The purple thing represents "spirit".

Overall, thank you for the answers

I take it we will be introduced to what bindstrip and wipeleaf are? As well as have a close-up of the purple-thing?

What about my guess at the slab (big white thing) in the courtyard?

But a bigger question I have is how the Temple is completely white? Is the entire thing made out of Marble or some other material?

I didn't immediately reply to this, because I hoped that I would get most of these questions answered in-strip, and I think that is now the case.

Yes it has mostly. Which I admit is a better way to answer the questions than giving away everything.

The Mansion of E :: MoE Questions and Feedback